Metal injection moulding (MIM) is a development of the traditional powder metallurgy (PM) process. MIM process work in four stage in which finely-powdered metal is mixed with binder material to create a “feedstock” that is then shaped and solidified using injection molding. The molding process allows high volume, complex parts to be shaped in a single step. After molding, the part undergoes conditioning operations to remove the binder (debinding) and densify the powders. Finished products are small components used in many industries and applications.

1) Feedstock
The MIM process starts with mixing the feedstock, a combination of metal powder and binder. The binder is a mixture of materials such as plastic and wax materials that melt and hold the metal particles in suspension while the stock flows into the mold cavities A typical feedstock might be 60 percent metal powder and 40 percent binder by volume.

2) Injection moulding
The feedstock is heated and forced into the mold cavities. The parts are removed from the mold. The newly molded parts are the shape of the final part, but larger. At this stage they are called “green” parts.

3) Debinding
The next step is called first stage debinding. This removes most, but not all, of the binder from the part. Debinding can be done with heat (thermally) or by a chemical process, either with solvents or with chemicals that react with the binder. After first stage debinding, a small amount of binder remains to help the part hold its shape. The part is now a “brown” part and is about 40 percent porous.

4) Sintering
Finally, the parts are set on ceramic trays, supported by fixtures if necessary, and placed in a furnace to remove the last of the binder and sinter the parts. Sintering may be done in a vacuum or in a hydrogen or other gaseous atmosphere, depending on the requirements of the metals. For example, metals that form oxide on the surface of the particles might be sintered in a hydrogen atmosphere to remove the oxide layer. 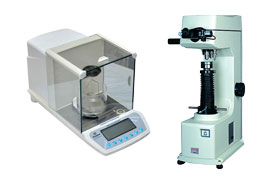 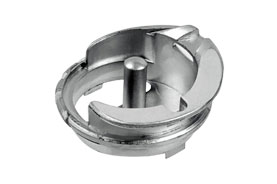